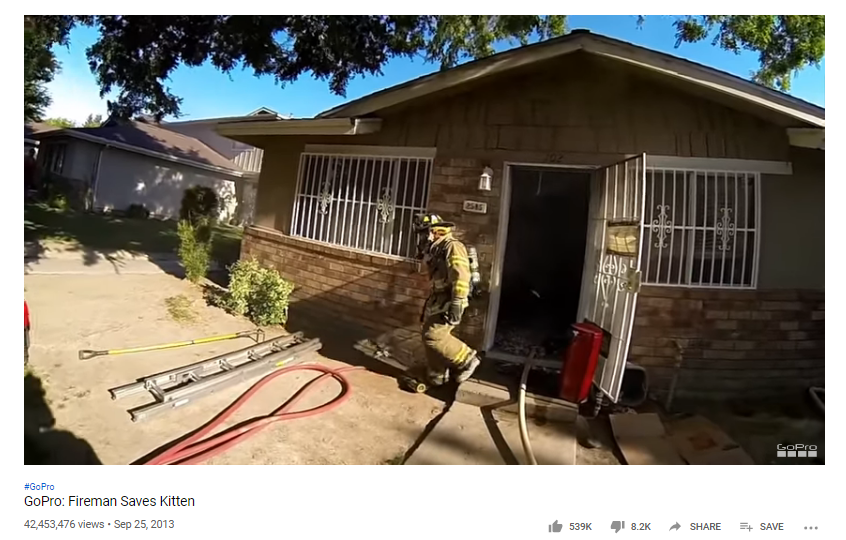 Video has come a long way since the early days of grainy black-and-white footage.

Today, video content is largely digital –and it’s all about online streaming. People love watching content online and 55% of us watch online videos at least once a day. It’s estimated that by 2022, video will account for 82% of all traffic on the internet.

Due to their immense popularity, videos are one of the most important marketing tools you can use to reach your target market.

Consider for a minute that video content is twelve times more likely to be shared online than all other forms of marketing content. Clips have one of the highest ROIs, especially because 78% of people watch at least one video online each week. Videos are also one of the best ways to share your message with consumers, as people retain 95% of the information shared in a video. Having videos on your website also increases the amount of time people spend on your website by about 88%.

Videos are the most popular way consumers learn more about products and services. Consumers favor video from the brands they follow more than any other type of content. In fact, people watch over 1 billion hours of video content daily on YouTube. More importantly, video is a powerful part of marketing and can help boost sales. Including a video on your homepage can increase conversion rates by 80% and traffic by 300%!

The best part about creating your own ads and video content is that it doesn’t have to cost an arm and a leg. Popular platforms like Facebook and YouTube make sharing videos easy. There is also a ton of free video editing software available that makes it simple and cost-effective to create entertaining, engaging, and popular marketing videos. In fact, some of the most popular videos to go viral were done with limited budgets and basic equipment.

While there’s no silver bullet that’ll guarantee your video will go viral, there are a number of things that you can do to ensure it’ll be well-received and resonate with your target audience.

The most important part of creating a popular and potentially viral video is to consider your audience and look for ways to connect with them. Creativity also goes a long way when you want to make a traffic-generating, sales-boosting marketing video. Videos go viral because of their content, not their budget. Some of the most watched ads and videos on the internet have been produced on limited or even non-existent budgets.

With this in mind let’s take a look at five videos that ended up going viral, all of them fairly low-budget.

Read on for inspiration!

While not every ad or video posted on Facebook or YouTube goes viral, even low-cost videos can have a huge impact on your sales and visibility. Most viral videos have one thing in common: they’re unique.

Below are five viral marketing videos that were made with little to no budget.

Blendtec sells blenders and their YouTube videos have tens of millions of views. Blendtec’s first “Will it Blend” video instantly went viral when it was added to their YouTube channel 13 years ago. So far, the video, which is less than one minute long, has received over 13 million views. What makes the video unique is that it is a fun and modern twist on classic infomercials. In the video, a man adds 50 glass marbles to the Blendtec blender. After turning the blender on for several seconds, all that is left of the marbles is a fine powder.

After the popularity of their initial video, Blendtec has made a small series of “Will it Blend” videos, choosing a different object or item to blend to demonstrate how powerful their blender is. One of the reasons why the videos are so successful is that many people complain that blenders aren’t strong enough to regularly blend hard or frozen items, like ice. The Blendtec videos show their blenders pulverizing everything from iPhones to marbles.

The graphics on the video, reminiscent of game shows like The Price is Right, are light and fun. The tone is casual, and the videos also successfully share a message about what makes Blendtec’s blenders better than the competition.

The original “Cart Whisperer” video garnered over one million views and is just under one-minute long. The video was shot without expensive props and is offbeat, encouraging the viewer to visit the company’s website to learn more about the ad. The ad itself is about abandoned shopping carts and stirs up the viewer’s curiosity. The dry dialogue and simple shots make the video creative and unique.

The video is a great example about how viral videos don’t always have to answer more questions than they raise.

The ad is unique and fun but also answers major questions viewers would have about the company. Although short, the ad effectively explains that for just $1 per month you can have new razors mailed to your house. The ad focuses on why Dollar Shave Club is different and what problem they solve, adding humor for pacing and to maintain audience attention.

GoPro sells high definition mobile cameras, and their Fireman Saves Kitten YouTube video has over 42 million views! During the ad, a fireman using a GoPro camera finds a kitten in a house that was on fire and performs emergency resuscitation to save the kitten’s life, capturing the viewers’ attention and tells an inspiring story. That story is then connected to GoPro, which helped the video go viral and raised GoPro’s visibility and sales.

The ad uses footage captured on a GoPro camera, which drastically limited the costs of production. The footage is in high definition, which helps demonstrate the quality of video GoPro’s products capture. The heartwarming rescue of the kitten also strikes emotional cords in the viewer, helping the viewer remember who the ad was for. GoPro found a heartwarming and positive way to showcase the video quality their cameras produce, which allowed them to focus on a story instead of their camera.

Alphabet Photography’s flash mob Hallelujah YouTube upload which was released just over a month before Christmas in 2010, went live at the perfect time. Alphabet Photography took advantage of the popularity of flash mobs and combined it with the Holiday season to create a unique, fun, entertaining ad that feels more like an actual music video.

With just under 62 million views, Alphabet Photography maximized their marketing content by producing a low-budget piece that was heartwarming, authentic, and memorable. Another effective technique used was having the flash mob occur at a shopping mall, since malls are synonymous with holiday shopping. This makes the video very relatable, as though anyone could have experienced a flash mob while shopping. 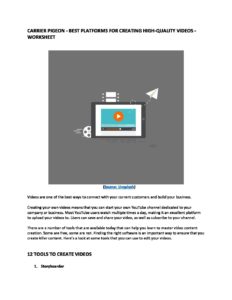 Get our Best Platforms for Creating High-Quality Videos Worksheet delivered right to your inbox.

While there’s no guarantee that any video you make will go viral, strong and creative videos still deliver results. Since consumers prefer online videos over television commercials, it makes it easier to keep your production and advertising costs low. You don’t need to have a million views for your video to make a difference for your business. In fact, since videos drive traffic and boost conversion rates they can lead to higher profits and greater visibility even if your video doesn’t get a ton of views.

Below are some helpful tips on how to create engaging, effective and well-received marketing videos.

Before you start recording, make sure that you identify your target audience. Your video should be aimed at your target market. The type of video you make depends on who the video is meant for. If your customers are young adults, the video content should be more modern than if it is targeting senior citizens. Your target market also influences where you should post your video. Certain platforms are more popular among certain demographics than others.

Viral videos have a common formula when it comes to advertising products or services: they identify a problem, zero in on it, and offer a practical solution. Infomercials almost always addressed all three points, but many viral videos also utilize this strategy –albeit in a more engaging, less formulaic way.

Storytelling is one of the most popular marketing video themes for a reason: It creates a highly entertaining and engaging theme that draws in your viewer. You can choose to tell a unique story about how your company started, or a story about how your product or service positively impacted someone’s life.

The great thing about telling a story is that you’re not limited to solely explaining your product or service. For example, the GoPro video went viral because it told a heartwarming story about a fireman rescuing a kitten. While the product wasn’t directly showcased, the footage was shot using the product which is how the story related to GoPro.

If you want to tell a story, think of something that is special about your company that can differentiate itself from competitors. Human interest stories are very popular and a great way to make your video stands out from the crowd.

Be Controversial (In a Positive Way!)

While controversy can cause your video to go viral, it’s important to remember that there’s a line that should never be crossed. There’s nothing wrong with stirring up discussion and encouraging viewers to think outside the box, but you’ll want to take care that you don’t stir up the wrong emotions or are in any way hurtful. In fact, some even disagree with employing these tactics altogether. Avoid offending or alienating your audience, and always be ethical when it comes to any controversy that you plan on stirring up.

Topics like politics, race, and religion should usually be avoided in marketing ads. Focus on unifying topics that promote positivity. Controversial ads can get you bad press and cause you to lose customers.

A great way to help your video gain traction is by connecting with your viewer’s emotion. Positive emotions like love and unity are common themes in viral videos. When viewers emotionally connect with your video, they’re more likely to share it with friends and family members. Videos that connect with the audiences’ emotion are also far more memorable.

Try to make sure that your video stirs positive emotions because it helps make viewers emotionally connect to and identify with your company and message.

Your marketing video should be able to capture the viewer’s attention from start to finish, which is why shorter videos typically are more successful. Shorter videos are also more effective because people generally have a short attention span.

A marketing video won’t go viral if you don’t share it on your website or social media profiles. While sending a marketing video to your email subscribers is a good way to spread your message, it’s important to also use the power of social media. Uploading your video to YouTube is a great idea because not only is it free, it’s the second most popular website in the world.

Uploading your video to social media platforms also makes it easy for others to share, which is a key part to helping your video gain popularity to a wide audience. Adding the video to your website is also important, as it generates increased traffic and helps increase the amount of time visitors spend on your site.

Adding videos to your marketing campaign can help to improve your Google ranking and boost awareness of your brand. With the above tips and some practice, you’ll soon be on your way towards creating excellent videos –the kind that resonate with your audience, and in some cases even go viral.

Be sure to download your FREE bonus content sheet: Best Platforms for Creating High-Quality Videos. And start creating videos today!

Looking to get your content get in front of a wider audience? We can help! Reach out today for a FREE 20-minute consultation!

Get our Best Platforms for Creating High-Quality Videos Worksheet delivered right to your inbox.